Bleu Adams owns House of Frybread, a restaurant in Provo. Tess Roundy reports on what it means for Adams to share her Native American food, as well as create a space where people can express who they are. As an Indigenous women though, she feels conflicted being called an American.

Indigenous values guide one restaurateur and activist in Provo

As an indigenous woman of the Mandan, Hidatsa and Diné tribes, her ancestors have been on United States land for many generations. But as the United States was developed, she said her people were some of the last to gain rights.

Adams fundamentally disagrees with the American culture, so her identity with being an American is complicated.

“I’m trying to represent my indigenous values and teachings in every aspect of my life and apply them where and when I can,” Adams said. “Which is sometimes not always the American way.”

'I belong to this land' 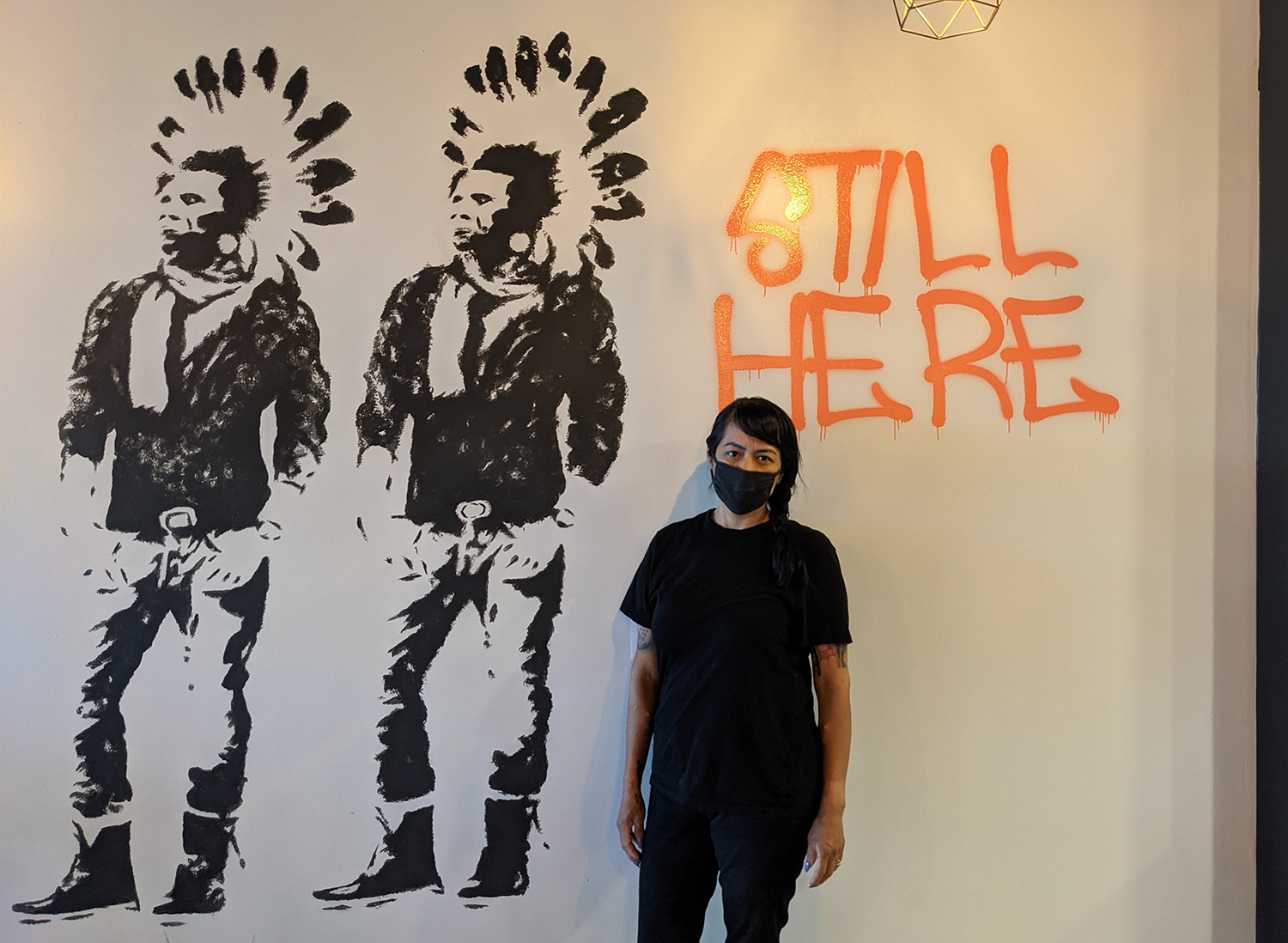 Bleu Adams stands next to a mural by artist Steven Paul Judd. “I love his statement of we’re still here and this is how we are now. You know, cultures and culture can evolve and it’s not static. So try to see us now and then,” Adams said. (Photo by Tess Roundy) 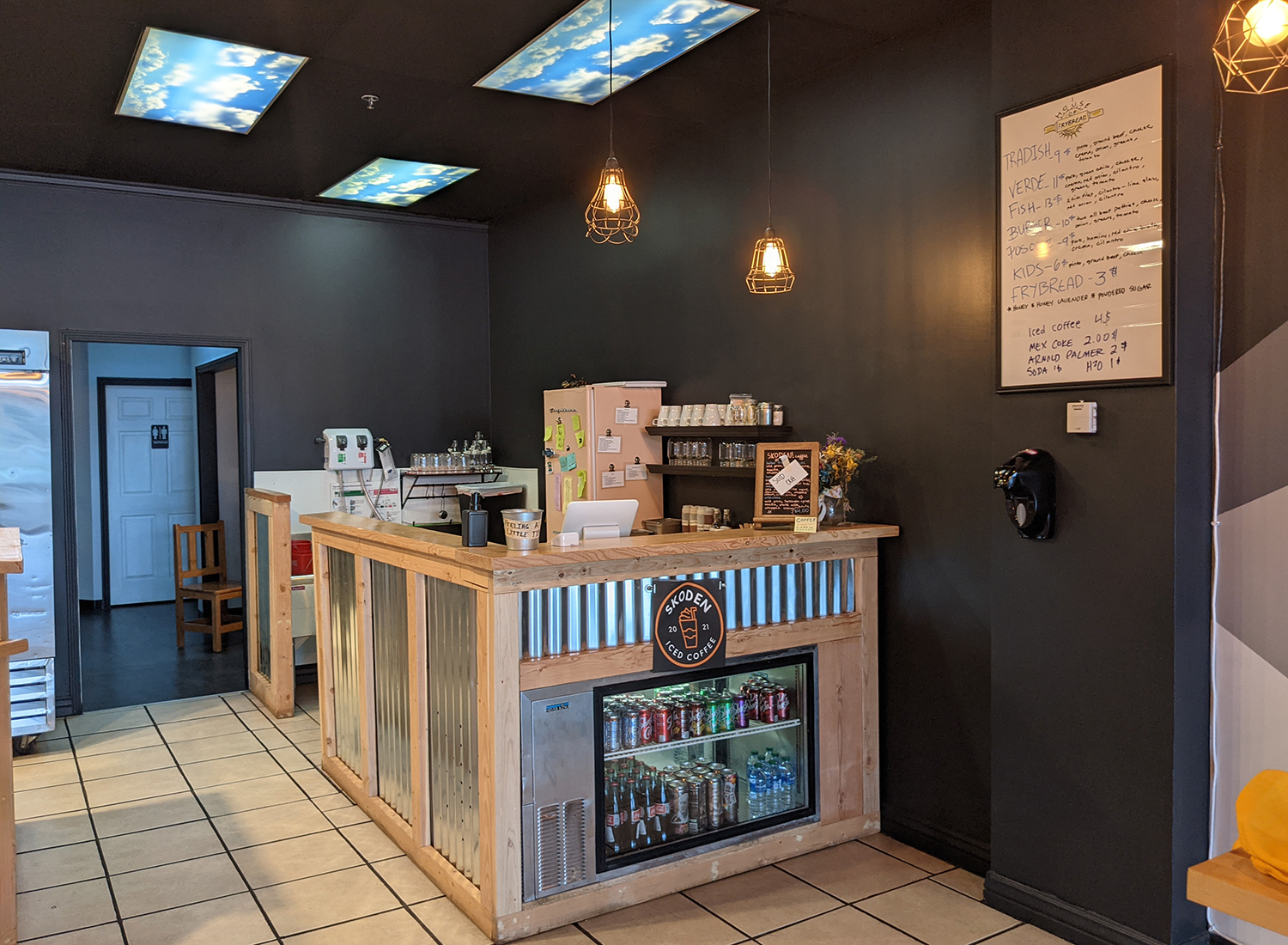 House of Frybread also has a coffee bar called Skoden Iced Coffee. Bleu Adams let her kids develop the recipes and they came up with drinks like Honey Baby Lavender Love and Coldchata. (Photo by Tess Roundy)

When Adams was in business school, she was taught the opposite of her own values. She learned the most important thing was profit margin at all costs.

Adams rejects this mindset. She sees herself as a relative to the universe. This means being connected to other people, animals and her environment.

At House of Frybread, Adam’s restaurant in Provo, Utah, she puts careful thought into sourcing her ingredients, supplies and how she treats her employees.

“That is a direct juxtaposition to this culture of individualism that Americans have,” Adams said. “And what I mean by that is everything that we do, we consider how that affects our community, how it affects generations beyond us … that filters through everything, even our businesses.”

She got the keys to the place early in 2020, right before the pandemic hit. Instead of converting it into a restaurant right away, she used it as a hub to gather donations of safety supplies like masks and face shields for the Navajo Nation.

Early on in the pandemic, Adams was worried about her community on the Navajo Nation. She said many family members share small living spaces and there isn’t easy access to water or grocery stores.

“It was just a recipe for disaster,” Adams said.

So, she started delivering donations. She’d drive seven hours once a week to the Navajo Nation.

“It was amazing because…oftentimes I would be the first person giving first responders, medical people, police officers PPE,” Adams said.

Once the pandemic response was more under control, she decided it was time to open House of Frybread. But that didn’t stop her from using the space to give back to her community.

House of Frybread is closed on Mondays to allow Indigenous and BIPOC groups to gather, support each other and share ideas.

The walls of Adams’ restaurant are painted with murals. They contribute to the feeling of being outside and ordering food from a Native food stand.

One mural covers the length of an entire wall. It was painted by Adams’ son, Max Adams. His mural represents the Wasatch mountain range and Utah’s five tribes; Ute, Goshute, Piute, Shoshone, and Diné.

“I just wanted to give [people] a space where they could come together, discuss issues, maybe come up [with] possible solutions and just feel safe … practicing their culture and maybe sharing their culture with other people.” Adams said. “So really, the only goal for me was to provide that place where people felt comfortable enough to be vulnerable.”

House of Frybread’s menu is written on a white board. This was a conscious choice by Bleu Adams who wanted to make the space feel like a reservation food stand. (Photo by Tess Roundy) 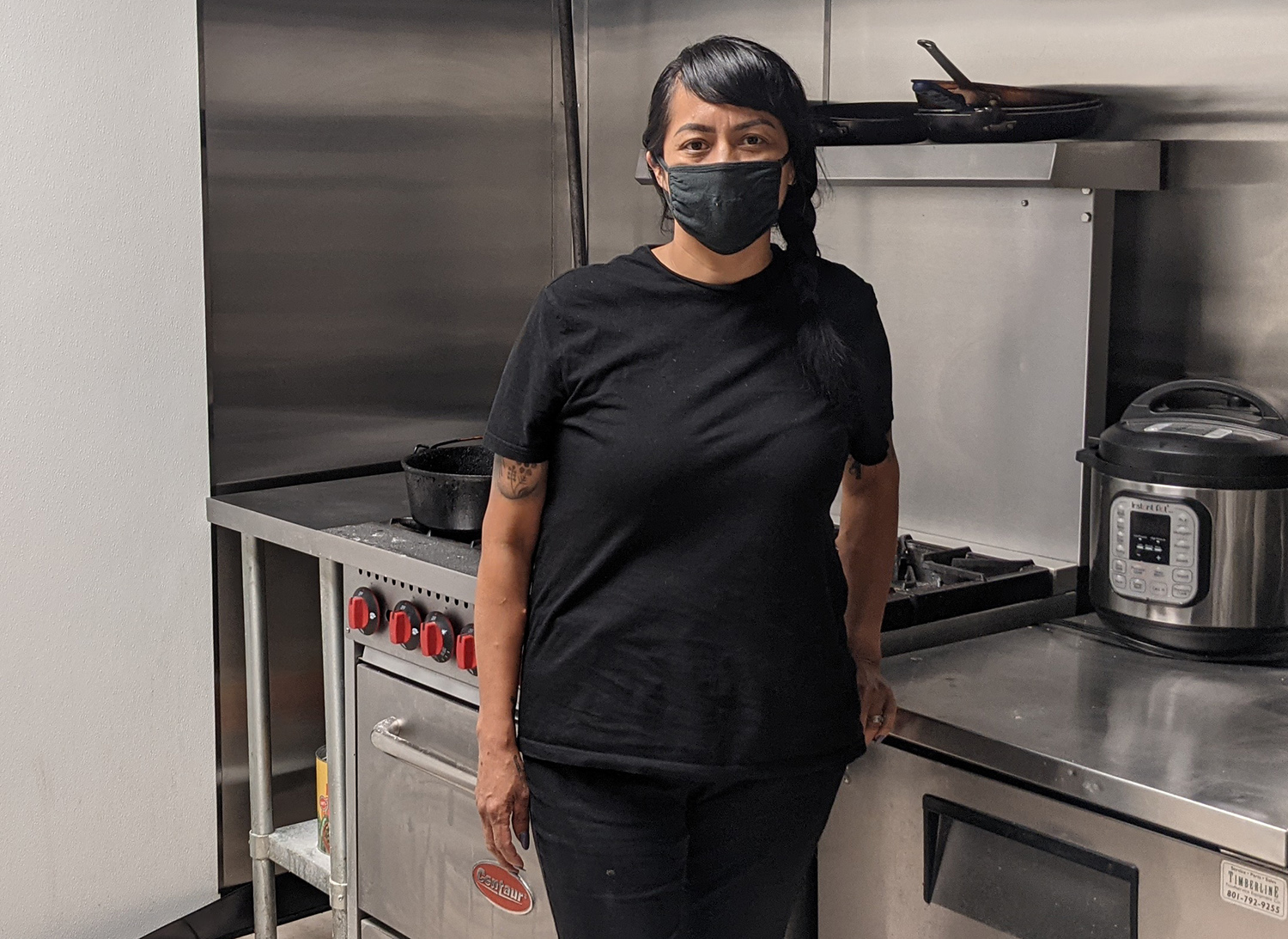 Bleu Adams stands in her kitchen at House of Frybread. There are no industrial fryers here. They fry the bread in cast iron pans which keeps the oil fresh, Adams said. (Photo by Tess Roundy)

Blue Adams’ son, Max Adams, is the artist behind this mural of the Wasatch Range. It not only depicts mountains important to the five Utah Tribes, it shows the different living structures including the teepee, wickiups, and hogons. (Photo by Tess Roundy)